This past week has been nothing short of crazy.  I don’t even know where to start.

The week before Halloween (Thursday night prior), Athena got out of the house.  This is a long, convoluted story, but basically the front door was left open and our little Houdini escaped into the dark.  I was all pumped up from a training session with Cori and got home to chaos.  We found her under the deck and then she bolted into the darkness of the neighborhood.  For the next five days, I was a complete lunatic.  She’s my cat and I was hysterical!  We were up at all hours of the night, walking the streets in the dark and calling her.  Unfortunately, it was also raining for three days of this fiasco, which resulted in me getting sick the next week.  Up at all hours+ raining+ cold=disease.

Anyway, there was a happy ending when on Halloween, Kevin’s dad found her by checking under one of our very small decks out back.  She shouldn’t have been able to get under there and I’m still not quite sure HOW she got under there or why he thought to check, but after almost three hours, Kevin and his dad extracted a very clean, but scared Athena.    That night, she was chillin’ like it never happened.

With my sense of purpose renewed and once I felt human enough to work on the tank this weekend, we set up the tank.  Here is a night shot, which is pretty cool.  I still think we need an air bubbler, but the jury is still out on this one.

We put in four fish this weekend to start the cycling process.  Two zebra danios and two leopard danios.  It’s good to start a cycle with hardy fish, but I think one of the leopards is struggling.  We shall see.  Anyway, they look like this… 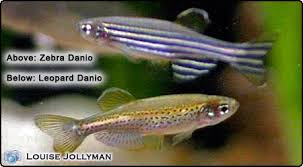 We named them after Sherlock Holmes characters.  Two are Sherlock and Watson and the other two are Moriarty and Irene.

On Friday of this week, we are to go back to the fish store to have the water tested again.  If it’s good, we can add more fish.  I want to get a bottom dweller and some tetras.  More pics to come!

In the meanwhile, Ms. Thing has already discovered the tank.  It’s a little fuzzy ’cause I caught her in the act!